Lincoln Highway Murals Along the Corridor 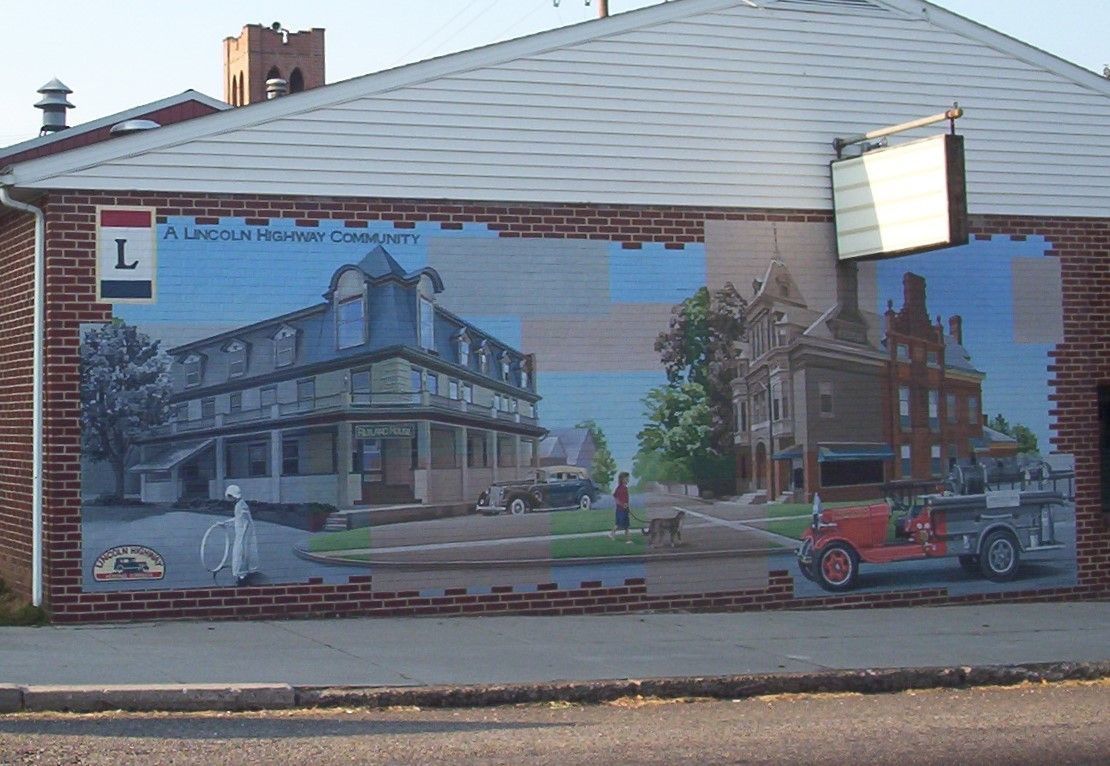 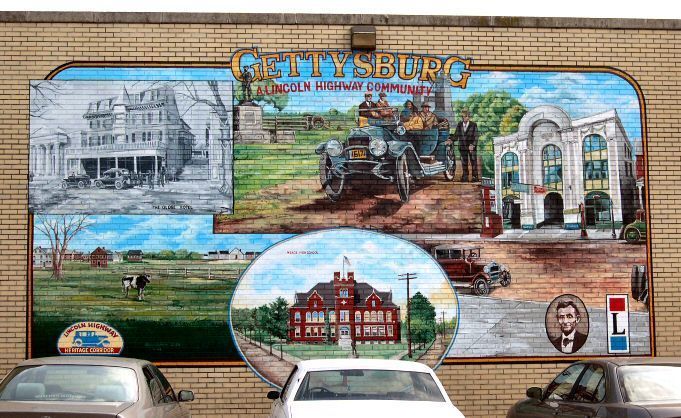 The mural in downtown Gettysburg is found on the side of the building at 2 Springs Ave, Gettysburg, PA 17325. For best access, park in the adjacent parking lot.

Chambersburg Mural
Go to Previous SlideGo to Next Slide

The Chambersburg mural is so large it can't fit in a single picture! The mural stretches the entire length of the building at 2071 Lincoln Way E, Chambersburg, PA 17202 and is most accessible from the parking lot in front of the building. 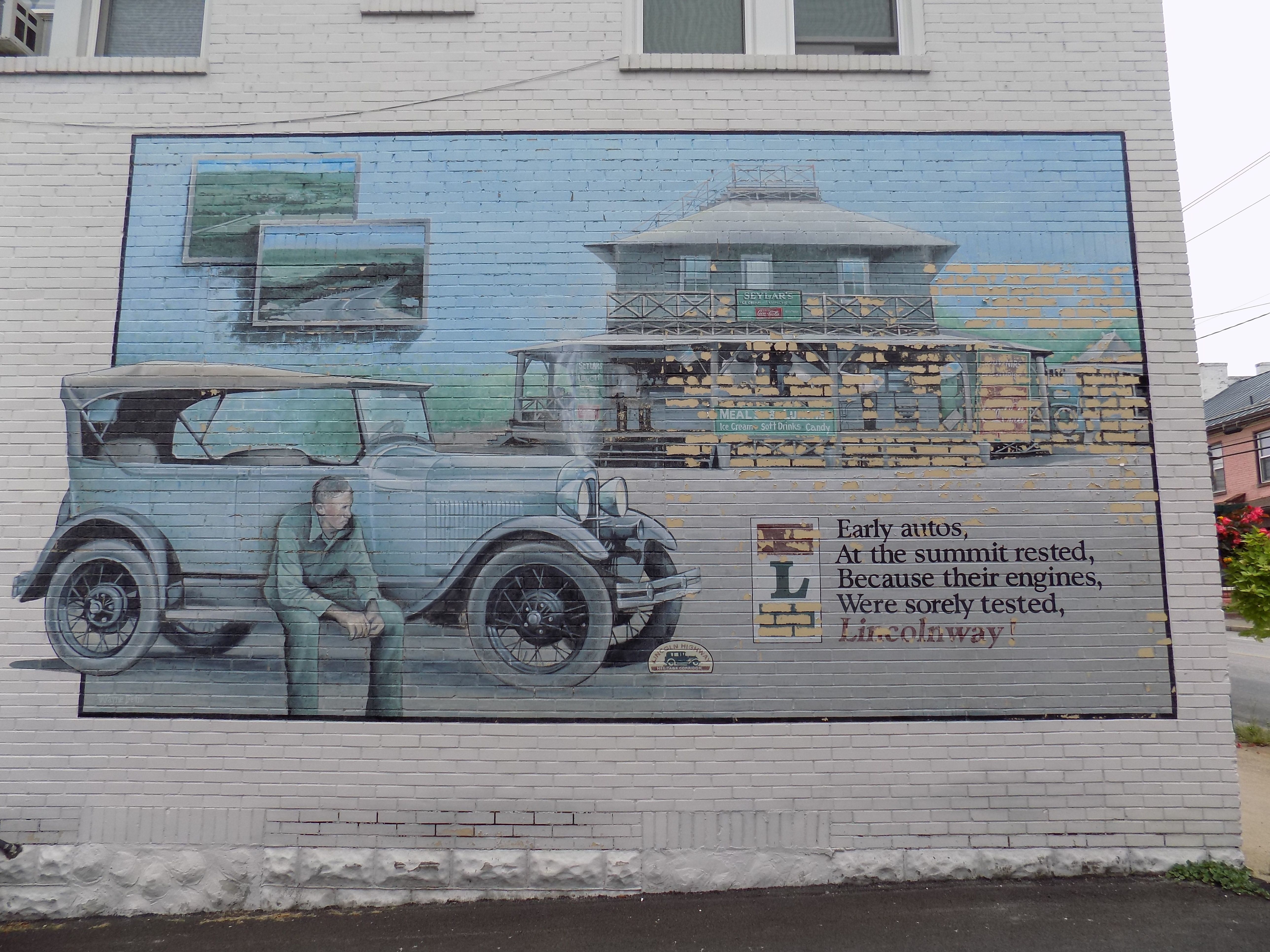 This mural is most easily accessed from the historic Fulton House of McConnellsburg, located at 112 Lincoln Way West, McConnellsburg, PA 17233. Park in the rear of the Fulton House, then make your way around to the front and the mural will be visible on the side of the adjacent building on the right. 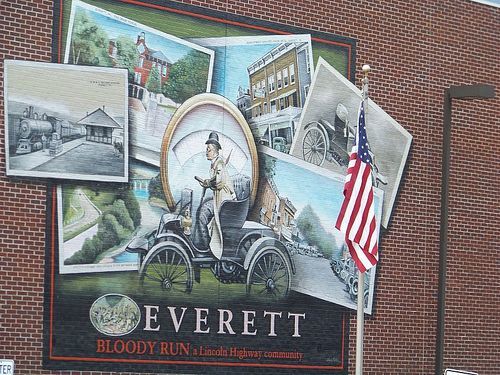 The mural in Everett is found on the side of the downtown building at 109 East Main Street, Everett, PA 15537. For best access, consider parking along the street or in the small lot behind the building. 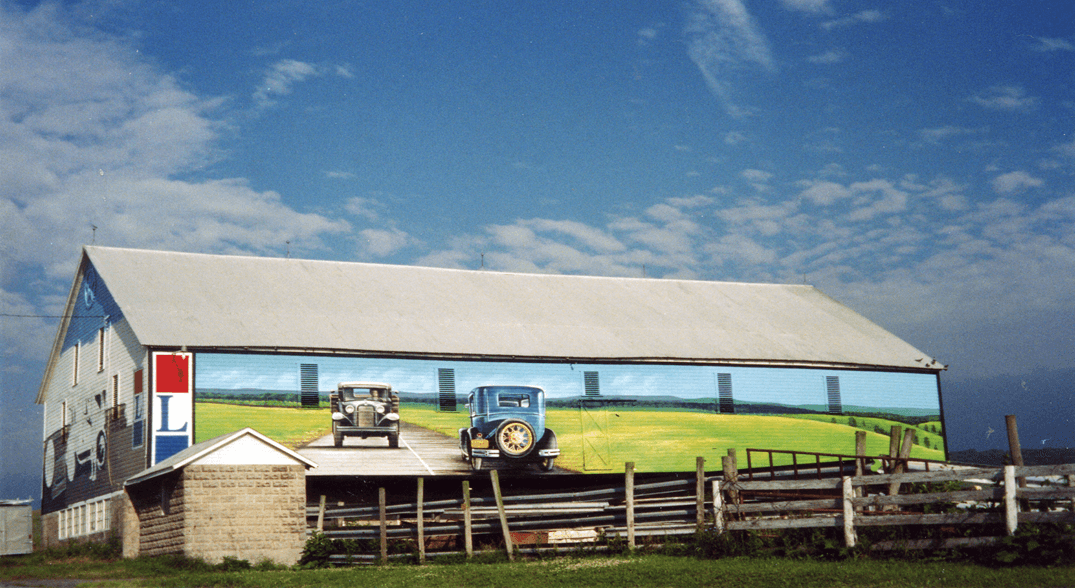 Near Schellsburg, a stunning mural encompasses two entire sides of the barn near the famous Bison Corral at 2708 Lincoln Hwy, Schellsburg, PA 15559. For best access to the mural, pull into the Bison Corral Gift Shop parking lot directly across the street and safely cross the Lincoln Highway to photograph the barn. 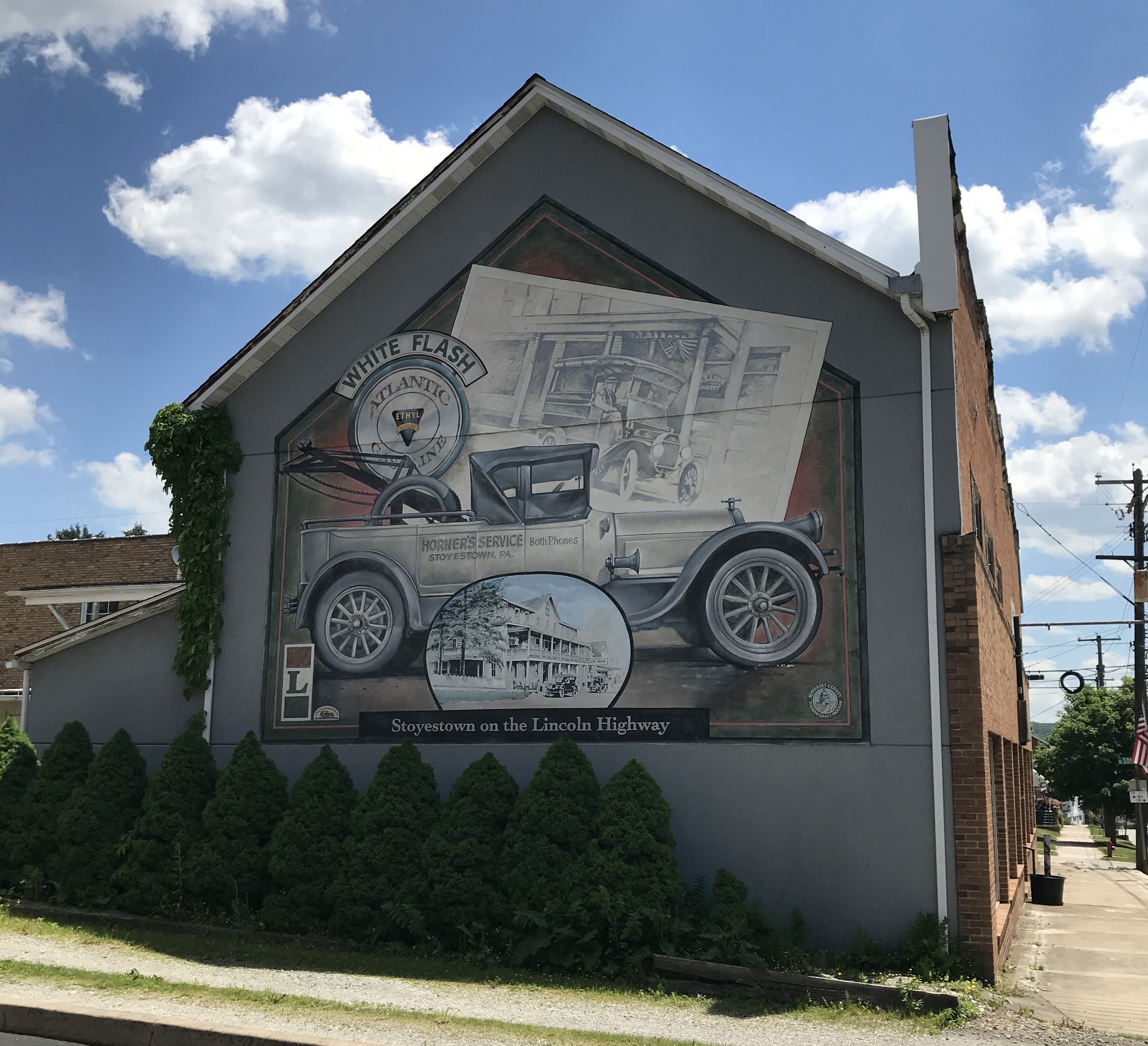 To see the Stoystown mural, park on the street in front of the historic Hite House at 121 West Main Street, Stoystown, PA 15563. The mural is visible on the adjacent building to the right across the alley. 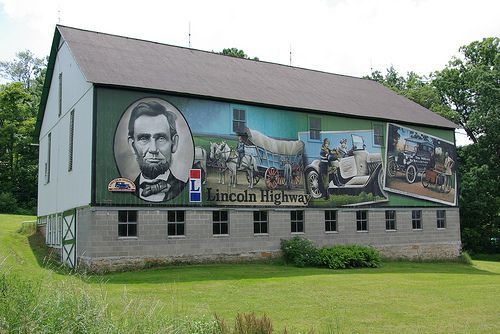 Just west of Stoystown is the historic Yaste Barn which features a stunning Lincoln Highway mural. To visit this mural, take a drive along the Lincoln Highway to 3258 Lincoln Hwy, Stoystown, PA 15563. To photograph this mural, safely pull off to the right side of the road and put your hazard lights on. Please do not trespass, but enjoy viewing the mural safely from the roadside. 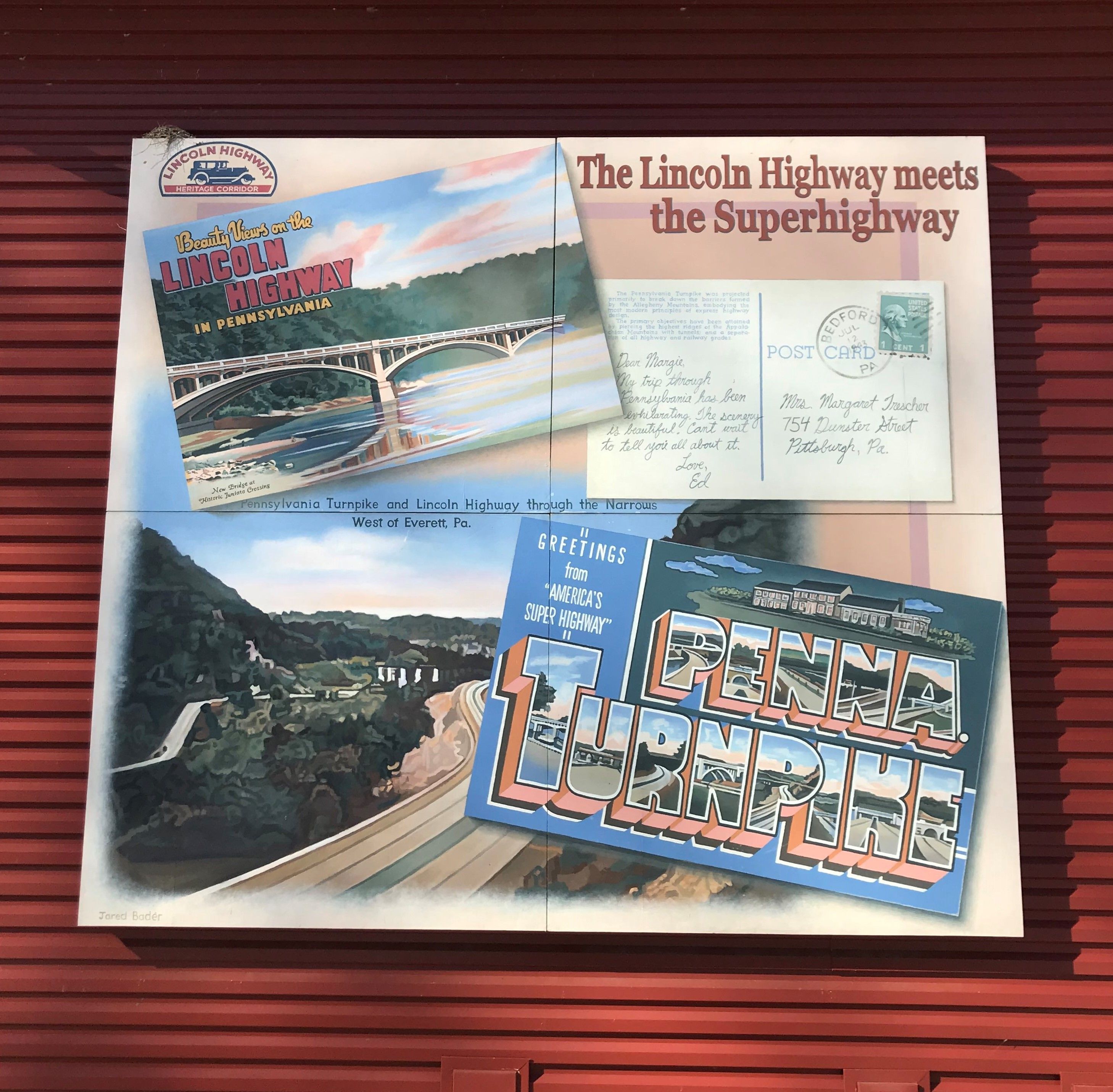 To view the mural at the Lincoln Highway Experience, travel to the museum at 3435 State Route 30 E, Latrobe, PA 15650 and park in the rear lot behind the building. From there, the mural can be easily viewed or photographed on the back of the museum building. 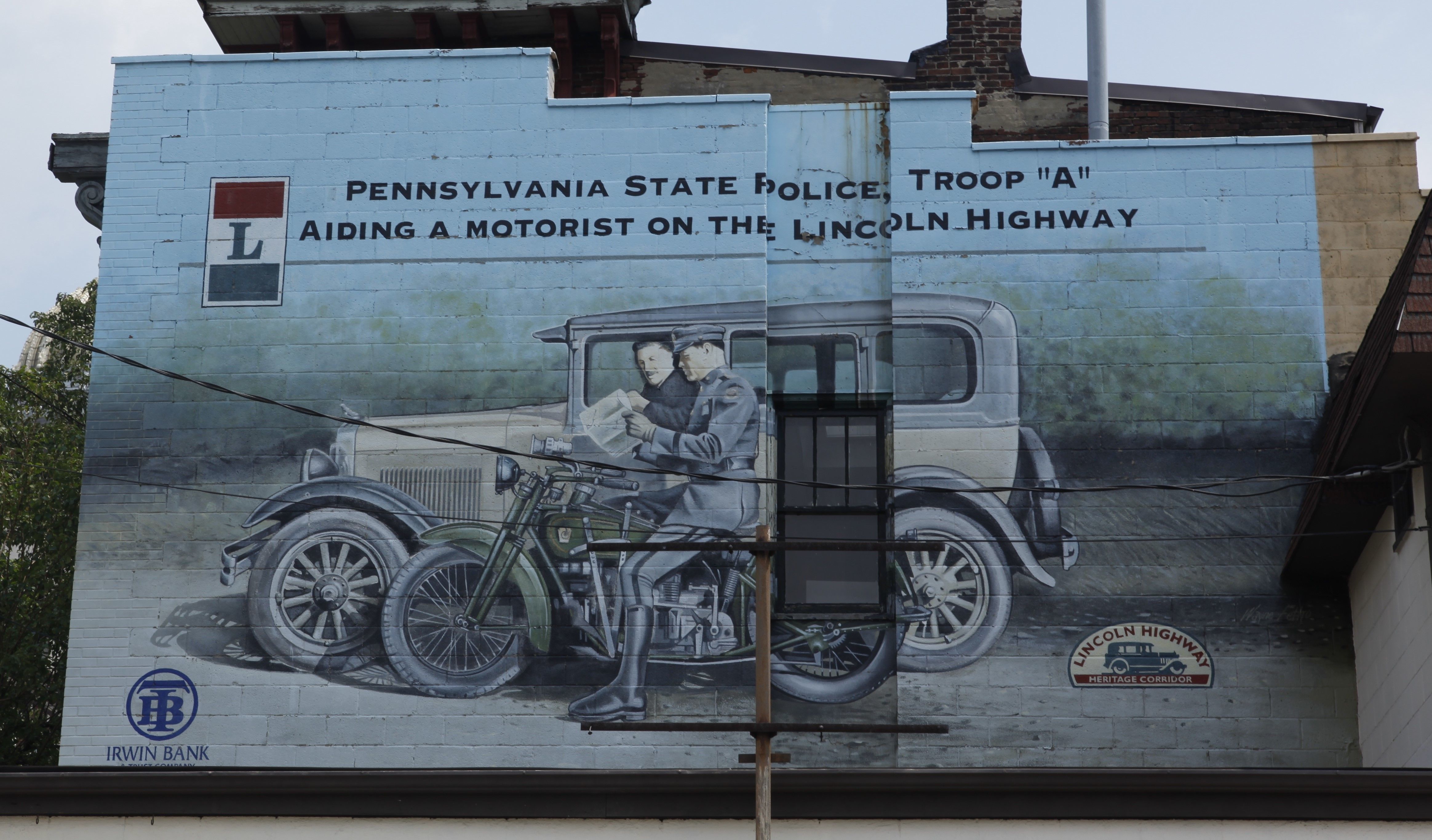 The mural in downtown Greensburg is located on the side of the building at 112 West Pittsburgh Street, Greensburg, PA 15601. As the original route of the Lincoln Highway now follows the path of a one-way street through downtown Greensburg, this mural is best accessed traveling eastward. There is a parking lot on the right just before reaching the mural that is suitable for stopping for photos of the mural. 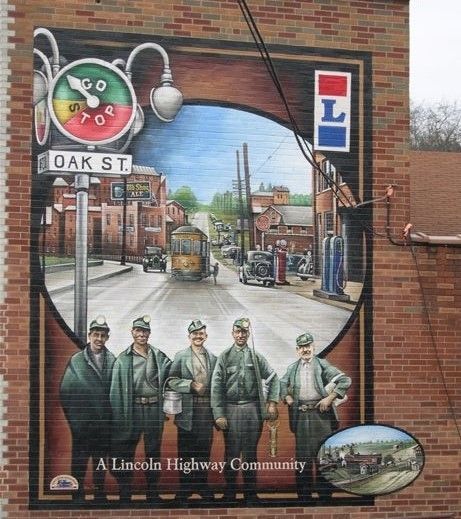 The Lincoln Highway mural in Irwin is found on the eastern side of the building at 75 Pennsylvania Ave, Irwin, PA 15642. It is best seen if traveling west through Irwin and there are easily accessible parking areas nearby for taking photos.